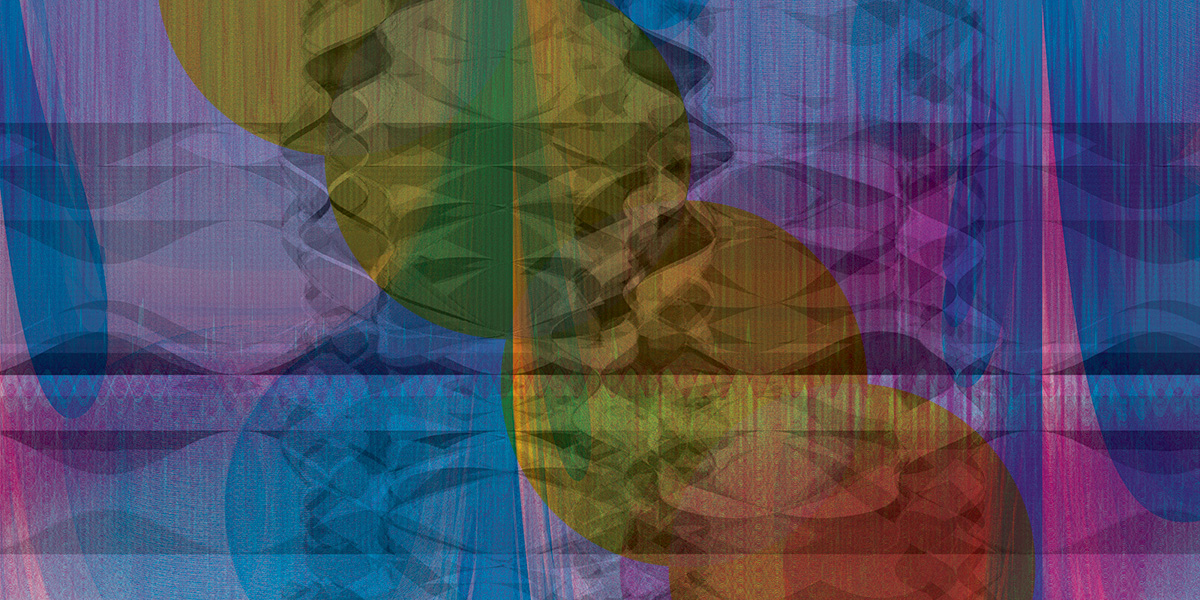 Temkin's recent solo show at higherpictures.com featured silver gelatin prints of trees shot on large-format film and then straightened with custom code, giving strips malls, telephone poles and restaurant signs the curves that once belonged to the elms, palms, and oaks they stand beside. Sixteen prints from this series were paired with Dither Studies, acrylic paintings on wood of orthogonal patterns in colors that "vibrate against each other in a most hyper-chromatic, retinally-stimulating way," The Brooklyn Rail writes. They start with asking the machine to represent an impossible color, which produces seemingly irrational patterns. Both bodies of work use media less associated with technology, in part to emphasize algorithmic and human processes rather than technological tools.

Other work includes Internet Directory, a list of every .com domain in alphabetical order, which, when read in public performances, plays out a seemingly exhaustive list of the possibile combinations of English words. His Folders programming language dematerializes text and asks programmers to write code by dragging folders into other folders, while his language "A Programming Language is a formal language, which comprises a set of instructions that produce various kinds of output" exposes the contradiction in the center of the Wikipedia definition of programming language by defining this definition itself as a new language. The Glitchometry series of computer-generated c-prints is built by applying sound algorithms to simple shapes, transforming them while seeing the result as sound waves. Other interactive pieces indulge in the excesses of language (building on Borges's writing), or allow for wild mispellings of code to function.

Temkin has written about code and programming languages as an art form for publications like Hyperallergic, and in many academic journals including Leonardo and World Picture Journal, as well as his blog esoteric.codes. Esoteric.codes brings together work by artists, writers, and hacker/hobbyists who challenge conventional notions of computing, connecting work that resonate conceptually but emerge across very different disciplines and communities. It won the 2014 ArtsWriters.org grant from Creative Capital and the Warhol Foundation, has been exhibited at ZKM and written in residence at Signal Culture and at the New Museum's New Inc incubator. He have spoken on this subject at the New Museum, and many conferences, including SIGGRAPH, SXSW, and Media Art Histories.

He received his MFA from the International Center of Photography / Bard College. Group exhibitions include Open Codes at ZKM, TRANSFER Download at Thoma Foundation, xCoAx at Museu do Chiado, Dumbo Arts Fest (where his work was projected on the Manhattan Bridge), Future Isms at Glassbox Gallery. His work has been a critic’s pick for Art News, the New York Times, and the Boston Globe.